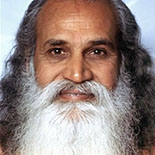 Satchidananda Saraswati (December 22, 1914 – August 19, 2002), born as C. K. Ramaswamy Gounder and known as Swami Satchidananda, was an Indian religious teacher, spiritual master and yoga adept, who gained fame and following in the West. He was the author of many philosophical and spiritual books. He had an enormous core of founding disciples who compiled and requested of Satchidananda Saraswati updated traditional handbooks of yoga such as the Yoga Sutras of Patanjali and the Bhagavad Gita for modern readers, both with his incisive insights as a Yogiraj, master yogi, and as a master of humorous parables.