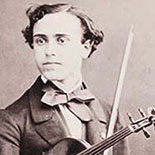 Sarasate, who had been playing in public since childhood, made his Paris debut as a concert violinist in 1860, and played in London the following year. Over the course of his career, he toured many parts of the world, performing in Europe, North America, and South America. His artistic pre-eminence was due principally to the purity of his tone, which was free from any tendency towards the sentimental or rhapsodic, and to that impressive facility of execution that made him a virtuoso.