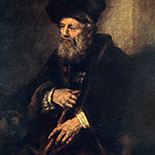 Judah ben Samuel of Regensburg (born 1140 – February 22, 1217), also called HeHasid or ‘the Pious’ in Hebrew, was one the of the Chassidei Ashkenaz, a movement of Jewish mysticism in Germany considered different from kabbalistic mysticism because it emphasizes specific prayer and moral conduct.

Anim Zemirot (lit. “I shall sing sweet songs”) is a Jewish liturgical poem sung in the synagogue at the end of Shabbat and holiday morning services. Formally, it is known as Shir Hakavod (lit. “Song of Glory”), but it is often referred to as anim zemirot, after the first two words of the poem. The poem is believed to have been written by Rav Yehudah Hachassid, the 12th-century German scholar and pietist.

The main body of Anim Z’mirot consists of 31 original verses, followed by two verses from Tanach: the first from Chronicles 29:11 and the second from Psalms 106:2. From the fifth to the twenty-eighth verse, the verses each begin with the successive letter in the Hebrew alphabet, except for the letter reish and tav, both of which appear twice.

To the author of Shir ha-Kavod, Kavod is the visible manifestation of God. It’s the part of God that is graspable by human experience, which is yet not God:

Note also that in stanza four it reads “Glories,” not “Glory.” For the Hasidei Ashkenaz, there are two Glories, a masculine “upper” Glory and a feminine “lower” Glory. The upper Kavod is obscure and inaccessible to mortals, but the lower Kavod can be perceived. From where did this two-fold emanation get derived? From a Biblical encounter between Moses and God.You will see My back, but My face cannot be seen (Ex. 33:23). It may also be inspired by the Talmudic dictum that one should pray with “eyes directed below and heart directed above” (Yeb. 105b). i.e., look at the lower Kavod while you imagine the unimaginable upper Kavod.

The masculine and feminine element comes from the Song of Songs, chapter 5, and Shir ha-Kavod uses the image of the male lover taken from there – “His locks are curled and black”; “dazzling and ruddy is He”; “His head is like pure gold” – as a description of Kavod. That also leaves open the possibility – unstated in the poem and therefore underdeveloped, but present nonetheless – that Israel itself is the female counterpart, the lower Kavod:

He beautifies Himself through me, because He desires me/ And He shall be for me a crown of beauty.

The poem concludes with an envelope stanza that reuses the verb “to yearn”: May my contemplation be sweet to You/ for my soul yearns for You. The use of the Hebrew word root Ayin-Resh-Bet here also has mystical connotations. It means “sweet,” invoking the sensuous aspect of the mystical experience. But the same root means “to mingle,” (sh’ti v’airev means “warp and woof”). This both parallels the opening line (“…and songs I weave…”) with the image of interwoven thoughts and reflects the mystic’s desire to merge with the divine.

Melodies I weave, songs I sweetly sing;
longing for Your Presence, to You I yearn to cling.

In Your shelter would my soul delight to dwell,
to grasp Your mystery, captured by Your spell.

Whenever I speak of Your glory so resplendent,
my heart yearns deeply for Your love transcendent.

Thus I glorify You in speech as in song,
declaring with my love: to You do I belong.

To Your assembled servants and in Your prophets’ speech,
You alluded to Your glory which is beyond our reach.

The scope of your greatness and he marvel of Your strength
are reflected in Your actions all described at length.

They have imagined You, but never as You are;
they tell of Your deeds, to portray You from afar.

They speak of You with parables in countless varied visions,
while You remain as One throughout all of their renditions.

They try to portray You as one now young, now old,
with hair now dark, now gray, as if it could be told.

Youth and force in battle, old age on judgment day;
like a seasoned warrior, with strength He clears the way.

He wears triumph as a helmet on His head,
His power and holiness have stood Him in good stead.

He takes pride in me, the source of His delight;
and He will be my splendor whose praise I will recite.

His head is envisioned as pure and beaten gold,
bearing His holy name in letters large and bold.

With kindness and dignity, with splendor that they share,
His people Israel crown Him with their prayer.

Adorned is His head with the curly locks of youth,
black as a raven. He is splendid as the truth.

Nothing is more precious among all His good pleasures
than Zion, seat of splendor, chief among His treasures.

His cherished people adorn Him as a crown,
a royal diadem of beauty and renown.

He beautifies the people He has carried since their birth.
For Him they are precious; He pays honor to their worth.

In mutual devotion, in each other we glorify;
I know that He is near when unto Him I cry.

Radiant and ruddy, His garments red as wine,
He compresses sinning nations as grapes on a vine.

The knot of His tefilin He showed to Moses, humble, wise;
the Lord’s vision and His ways revealed only to his eyes.

Exalting the humble, enthroned upon their praise,
He takes pleasure in His people, exalted through heir ways.

Your word is based on truth from the start of all Creation;
since we always seek You, seek the welfare of our nation.

Cherish my plentitude of song as Your own;
may my verses be permitted to approach Your throne.

My praise I humbly offer as a crown upon Your head;
we no longer offer incense, accept my prayer instead.

May the words of this my song be precious as the Psalter
once offered in the Temple with sacrifice upon the altar.

May my prayer rise to the Creator of the miracle of birth,
Master of beginnings whose might and justice fill the earth.

And when I chant my prayer, may You greet it with assent;
the spirit of ancient offerings to You is my intent.

May You find sweet and pleasing my prayer and my songs;
my soul goes out in yearning, for You alone it longs.

The Ark is closed
Yours, O Lord, is the greatness and the power and the splendor. Yours is the triumph and the majesty, for all in the heavens and earth is Yours. Yours, O Lord, is supreme sovereignty. Who can recount the Lord’s mighty deeds, who can do full justice to His praise?