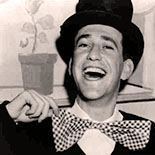 Soupy was best known for his local and network children’s television show, Lunch with Soupy Sales; a series of comedy sketches frequently ending with Sales receiving a pie in the face, which became his trademark.

From 1968 to 1975, he was a regular panelist on the syndicated revival of What’s My Line? and appeared on several other TV game shows. During the 1980s, Sales hosted his own show on WNBC-AM in New York City.