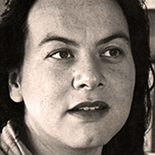 Muriel Rukeyser (December 15, 1913 – February 12, 1980) was an American poet and political activist, best known for her poems about equality, feminism, social justice, and Judaism. Kenneth Rexroth said that she was the greatest poet of her “exact generation”.

One of her most powerful pieces was a group of poems entitled The Book of the Dead (1938), documenting the details of the Hawk’s Nest incident, an industrial disaster in which hundreds of miners died of silicosis.

Her poem “To be a Jew in the Twentieth Century” (1944), on the theme of Judaism as a gift, was adopted by the American Reform and Reconstructionist movements for their prayer books, something Rukeyser said “astonished” her, as she had remained distant from Judaism throughout her early life.

Two bodies face to face
are at times two waves
and night is an ocean.

Two bodies face to face
are at times two stones
and night is a desert.

Two bodies face to face
are at times two roots
and night is the earth.

Two bodies face to face
are two stars falling down
in an empty sky.

It’s like a tap-dance
Or a new pink dress,
A shit-naive feeling
Saying Yes.

Some say Never
Some say Unless
It’s stupid and lovely
To rush into Yes.

Some go local
Some go express
Some can’t wait
To answer Yes.

Some complain
Of strain and stress
The answer may be
No for Yes.

Open your eyes,
Dream but don’t guess.
Your biggest surprise
Comes after Yes.