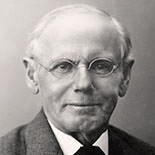 He was a son of a farmer and grew up in the forests and fields. Rosegger (or Rossegger) went on to become a most productive poet and author as well as an insightful teacher and visionary. In his later years, he was honoured by officials from various Austrian universities. He was nearly awarded the Nobel Prize in 1913 and is among his people a national hero to this day.

THE OTHER, TOO, IS YOUPeter RoseggerWhat once Earth to me presented
she’s already asking back;
comes to take what she had granted,
grasping tender speck by speck.

Strange: the more of hurts I carried
the more beauty showed the land;
What I fought for, gains of merit,
softly falling from my hand.

And the lighter I am getting,
the more heavily I walk:
‘Can’t you, from your moistened setting,
spare me, Earth? I beg you, talk!’

‘No, I cannot spare you, Brother,
need you for the other one;
out of you I’ll feed the other:
let him also see the sun.

But relax and do not rue:
For the Other, too ’tis You!’

Not so much of strife but of peace to pursue,
not so much of I but a bit more of You,
not fear nor despondence but more enterprise
and strength to take action – now that would be wise!