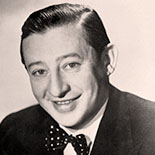 Rose is credited with many famous songs, notably “Me and My Shadow” (1927), “Without A Song” (1929), “It Happened in Monterrey” (1930) and “It’s Only a Paper Moon” (1933). For decades preceding and immediately after the Second World War Billy Rose was a major force in entertainment, with shows, such as Jumbo (1935), Billy Rose’s Aquacade, and Carmen Jones (1943), his Diamond Horseshoe nightclub, and the Ziegfeld Theater influencing the careers of many stars. Billy Rose was inducted as a member of the Songwriter’s Hall of Fame. After divorcing comedian Fanny Brice, he married Olympic swimmer Eleanor Holm.