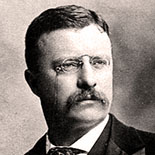 Citizenship in a Republic is the title of a speech given by the former President of the United States, Theodore Roosevelt at the Sorbonne in Paris, France on April 23, 1910.

One notable passage on page seven of the 35-page speech is referred to as “The Man in the Arena”:

It is not the critic who counts; not the man who points out how the strong man stumbles, or where the doer of deeds could have done them better. The credit belongs to the man who is actually in the arena, whose face is marred by dust and sweat and blood; who strives valiantly; who errs, who comes short again and again, because there is no effort without error and shortcoming; but who does actually strive to do the deeds; who knows great enthusiasms, the great devotions; who spends himself in a worthy cause; who at the best knows in the end the triumph of high achievement, and who at the worst, if he fails, at least fails while daring greatly, so that his place shall never be with those cold and timid souls who neither know victory nor defeat.

Someone who is heavily involved in a situation that requires courage, skill, or tenacity (as opposed to someone sitting on the sidelines and watching), is sometimes referred to as “the man in the arena.”

Nelson Mandela gave a copy of this speech to François Pienaar, captain of the South African rugby team, before the start of the 1995 Rugby World Cup, in which the South African side eventually defeated the heavily favoured All Blacks of New Zealand. In the film based on those events, the poem “Invictus” is used instead.

Mark DeRosa, an American professional baseball utility player then with the Washington Nationals, read the passage to teammates prior to the Nationals’ pivotal Game Four versus the St. Louis Cardinals in the 2012 National League Division Series which was won on a walk-off home run by the Nationals’ Jayson Werth. Since his days at the University of Pennsylvania, DeRosa would turn to those words before important games. American scholar, Brené Brown, used a somewhat abbreviated version of the quote in her March 2012 TED talk “Listening to Shame,” and subsequently as the inspiration for the title of her book, Daring Greatly (2012).

When then Ferrari formula one driver Jean Alesi was about to start the last lap of the 1995 Canadian Grand Prix (which would become his only Grand Prix win), then ESPN commentator Bob Varsha used parts of Roosevelt´s speech, saying that Alesi looked a while like being the man Roosevelt had talked about.