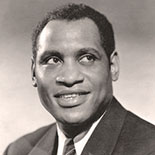 Paul Leroy Robeson (April 9, 1898 – January 23, 1976) was an American singer and actor who became involved with the Civil Rights Movement.

At Rutgers College, he was an outstanding football player, then had an international career in singing, as well as acting in theater and movies. He became politically involved in response to the Spanish Civil War, fascism, and social injustices. His advocacy of anti-imperialism, affiliation with communism, and criticism of the United States government caused him to be blacklisted during the McCarthy era. Ill health forced him into retirement from his career. He remained until his death an advocate of the political stances he took.

Robeson won an academic scholarship to Rutgers College, where he became a football All-American and the class valedictorian. He received his LL.B. from Columbia Law School, while playing in the National Football League (NFL). At Columbia, he sang and acted in off-campus productions; and, after graduating, he became a participant in the Harlem Renaissance with performances in The Emperor Jones and All God’s Chillun Got Wings. Robeson initiated his international artistic résumé with a theatrical role in Great Britain, settling in London for the next several years with his wife Essie.

Robeson next appeared as Othello at the Savoy Theatre before becoming an international cinema star through roles in Show Boat and Sanders of the River. He became increasingly attuned towards the sufferings of other cultures and peoples. Acting against advice, which warned of his economic ruin if he became politically active, he set aside his theatrical career to advocate the cause of the Republican forces of the Spanish Civil War. He then became active in the Council on African Affairs (CAA).

During World War II, he supported America’s war efforts and won accolades for his portrayal of Othello on Broadway. However, his history of supporting pro-Soviet policies brought scrutiny from the FBI. After the war ended, the CAA was placed on the Attorney General’s List of Subversive Organizations and Robeson was investigated during the age of McCarthyism. Due to his decision not to recant his public advocacy of pro-Soviet policies, he was denied a passport by the U.S. State Department, and his income, consequently, plummeted. He moved to Harlem and published a periodical critical of United States policies. His right to travel was eventually restored by the 1958 United States Supreme Court decision, Kent v. Dulles, but his health broke down. He retired and he lived out the remaining years of his life privately in Philadelphia.