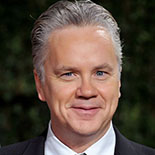 Robbins is known for his roles as Nuke in Bull Durham, Jacob Singer in Jacob’s Ladder, Griffin Mill in The Player, Andy Dufresne in The Shawshank Redemption, and as Dave Boyle in Mystic River, for which he won an Academy Award for Best Supporting Actor, and for directing critically acclaimed films such as Dead Man Walking.