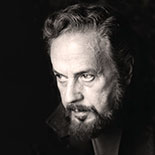 Yiannis Ritsos (May 1, 1909— November 11, 1990) was a Greek poet and left-wing activist and an active member of the Greek Resistance during World War II.

Born to a well-to-do landowning family in the Monemvasia, Ritsos suffered great losses as a child. The early deaths of his mother and his eldest brother from tuberculosis, the commitment of his father who suffered with mental disease and the economic ruin of losing his family marked Ritsos and affected his poetry. Ritsos, himself, was confined in a sanitarium for tuberculosis from 1927 – 1931.

Today, Ritsos is one of the four great Greek poets of the twentieth century, together with Kostis Palamas, Giorgos Seferis, and Odysseus Elytis. The French poet Louis Aragon once said that Ritsos was “the greatest poet of our age.” He was unsuccessfully proposed nine times for the Nobel Prize for Literature. When he won the Lenin Peace Prize (also known as the Stalin Peace Prize prior to 1956) he declared “this prize it’s more important for me than the Nobel”.

The woman stood up in front of the table. Her sad hands
begin to cut thin slices of lemon for tea
like yellow wheels for a very small carriage
made for a child’s fairy tale. The young officer sitting opposite
is buried in the old armchair. He doesn’t look at her.
He lights up his cigarette. His hand holding the match trembles,
throwing light on his tender chin and the teacup’s handle. The clock
holds its heartbeat for a moment. Something has been postponed.
The moment has gone. It’s too late now. Let’s drink our tea.
Is it possible, then, for death to come in that kind of carriage?
To pass by and go away? And only this carriage to remain,
with its little yellow wheels of lemon
parked for so many years on a side street with unlit lamps,
and then a small song, a little mist, and then nothing?

The lip of the glass gleams in the moonlight
like a round razor – how can I lift it to my lips?
however much I thirst – how can I lift it – Do you see?
I am already in a mood for similes – this at least is left me,
reassuring me still that my wits are not failing.
Let me come with you.

But who can play this game to the end?
And the bear gets up again and moves on
obedient to her leash, her rings, her teeth,
smiling with torn lips at the pennies the beautiful and unsuspecting children toss
(beautiful precisely because unsuspecting)
and saying thank you. Because bears that have grown old
can say only one thing: thank you; thank you.
Let me come with you.

This house stifles me. The kitchen especially
is like the depths of the sea. The hanging coffeepots gleam
like round, huge eyes of improbable fish,
the plates undulate slowly like medusas,
seaweed and shells catch in my hair – later I can’t pull them loose –
I can’t get back to the surface –
the tray falls silently from my hands – I sink down
and I see the bubbles from my breath rising, rising
and I try to divert myself watching them
and I wonder what someone would say who happened to be above and saw these bubbles,
perhaps that someone was drowning or a diver exploring the depths?

And in fact more than a few times I’ve discovered there, in the depths of drowning,
coral and pearls and treasures of shipwrecked vessels,
unexpected encounters, past, present, and yet to come,
a confirmation almost of eternity,
a certain respite, a certain smile of immortality, as they say,
a happiness, an intoxication, inspiration even,
coral and pearls and sapphires;
only I don’t know how to give them – no, I do give them;
only I don’t know if they can take them – but still, I give them.
Let me come with you.

One moment while I get my jacket.
The way this weather’s so changeable, I must be careful.
It’s damp in the evening, and doesn’t the moon
seem to you, honestly, as if it intensifies the cold?
Let me button your shirt – how strong your chest is
– how strong the moon – the armchair, I mean – and whenever I lift the cup from the table
a hole of silence is left underneath. I place my palm over it at once
so as not to see through it – I put the cup back in its place;
and the moon’s a hole in the skull of the world – don’t look through it,
it’s a magnetic force that draws you – don’t look, don’t any of you look,
listen to what I’m telling you – you’ll fall in. This giddiness,
beautiful, ethereal – you will fall in –
the moon’s marble well,
shadows stir and mute wings, mysterious voices – don’t you hear them?

Deep, deep the fall,
deep, deep the ascent,
the airy statue enmeshed in its open wings,
deep, deep the inexorable benevolence of the silence –
trembling lights on the opposite shore, so that you sway in your own wave,
the breathing of the ocean. Beautiful, ethereal
this giddiness – be careful, you’ll fall. Don’t look at me,
for me my place is this wavering – this splendid vertigo. And so every evening
I have little headache, some dizzy spells.

Often I slip out to the pharmacy across the street for a few aspirin,
but at times I’m too tired and I stay here with my headache
and listen to the hollow sound the pipes make in the walls,
or drink some coffee, and, absentminded as usual,
I forget and make two – who’ll drink the other?
It’s really funny, I leave it on the window-sill to cool
or sometimes drink them both, looking out the window at the bright green globe of the pharmacy
that’s like the green light of a silent train coming to take me away
with my handkerchiefs, my run-down shoes, my black purse, my verses,
but no suitcases – what would one do with them?
Let my come with you.

Oh, are you going? Goodnight. No, I won’t come. Goodnight.
I’ll be going myself in a little. Thank you. Because, in the end, I must
get out of this broken-down house.
I must see a bit of the city – no, not the moon –
the city with its calloused hands, the city of daily work,
the city that swears by bread and by its fist,
the city that bears all of us on its back
with our pettiness, sins, and hatreds,
our ambitions, our ignorance and our senility.
I need to hear the great footsteps of the city,
and no longer to hear your footsteps
or God’s, or my own. Goodnight.

The room grows dark. It looks as though a cloud may have covered the moon. All at
once, as if someone had turned up the radio in the nearby bar, a very familiar musical
phrase can be heard. Then I realize that “The Moonlight Sonata”,  just the first
movement, has been playing very softly through this entire scene. The Young Man will
go down the hill now with an ironic and perhaps sympathetic smile on his finely
chiselled lips and with a feeling of release. Just as he reaches  St. Nicolas, before he
goes down the marble steps, he will laugh – a loud, uncontrollable laugh. His laughter
will not sound at all unseemly beneath the moon. Perhaps the only unseemly thing will
be that nothing is unseemly. Soon the Young Man will fall silent, become serious, and
say: “The decline of an era.” So, thoroughly calm once more, he will unbutton his shirt
again and go on his way. As for the woman in black, I don’t know whether she finally
did get out of the house. The moon is shining again. And in the corners of the room the
shadows intensify with an intolerable regret, almost fury, not so much for the life, as for
the useless confession. Can you hear? The radio plays on: