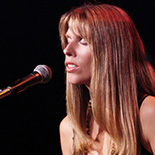 Deva is a classically trained musician, who grew up singing mantras in a German home permeated with Eastern spirituality. Her albums have topped the New Age charts throughout the world since her first release, The Essence (1998), featuring the “Gayatri Mantra”. Deva & Miten’s record company, Prabhu Music, reports sales of over 900,000 albums.