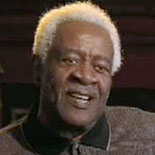 Pinkney was often said to be the last surviving original member of The Drifters, who achieved international fame with numerous hit records. He was chiefly responsible for its early sounds. The Drifters have had a strong influence on soul, rhythm and blues, and rock and roll music.