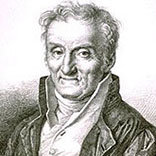 Pinel was instrumental in the development of a more humane psychological approach to the custody and care of psychiatric patients, referred to today as moral therapy. He also made notable contributions to the classification of mental disorders and has been described by some as “the father of modern psychiatry”. An 1809 description of a case that Pinel recorded in the second edition of a textbook on insanity is regarded as the earliest evidence for the existence of the form of mental disorder known as dementia praecox or schizophrenia in the 20th century.

He was the son and nephew of physicians. After receiving a degree from the faculty of medicine in Toulouse, he studied an additional four years at the Faculty of Medicine of Montpellier. He arrived in Paris in 1778. 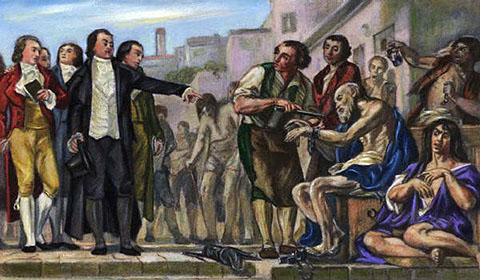 He spent fifteen years earning his living as a writer, translator, and editor because the restrictive regulations of the old regime prevented him from practicing medicine in Paris. The faculty did not recognize a degree from a provincial university like Toulouse. He failed twice in a competition which would have awarded him funds to continue his studies. In the second competition, the jury stressed his ‘painful’ mediocrity in all areas of medical knowledge, an assessment seemingly so grossly incompatible with his later intellectual accomplishments that political motives have been suggested.Discouraged, Pinel considered emigrating to America. In 1784 he became editor of the not very prestigious medical journal the Gazette de santé, a four-page weekly. He was also known among natural scientists as a regular contributor to the Journal de physique. He studied mathematics, translated medical works into French, and undertook botanical expeditions.

At about this time he began to develop an intense interest in the study of mental illness. The incentive was a personal one. A friend had developed a ‘nervous melancholy’ that had ‘degenerated into mania’ and resulted in suicide. What Pinel regarded as an unnecessary tragedy due to gross mismanagement seems to have haunted him. It led him to seek employment at one of the best-known private sanatoria for the treatment of insanity in Paris. He remained there for five years prior to the Revolution, gathering observations on insanity and beginning to formulate his views on its nature and treatment.