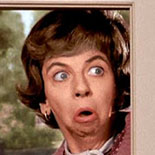 Pearce was brought to Hollywood by Gene Kelly to reprise her Broadway performance in the film version of On the Town (1949). Pearce played comedic supporting roles in several films, before being cast as nosy neighbor Gladys Kravitz in the television sitcom Bewitched in 1964. She won the Primetime Emmy Award for Outstanding Supporting Actress in a Comedy Series posthumously after the second season of the series.