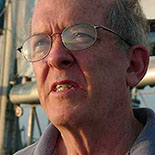 Roger Searle Payne (born January 29, 1935) is a biologist and environmentalist famous for the 1967 discovery (with Scott McVay) of whale song among humpback whales. Payne later became an important figure in the worldwide campaign to end commercial whaling.

Payne studied at Harvard University and Cornell. He spent the early years of his career studying echolocation in bats (and how their food, moths, avoids them) and auditory localization in owls. Desiring to work with something more directly linked to conservation he later focused his research on whales where he together with researcher Scott McVay in 1967 were the first to discover the complex sonic arrangements performed by the male humpback whales during the breeding season. 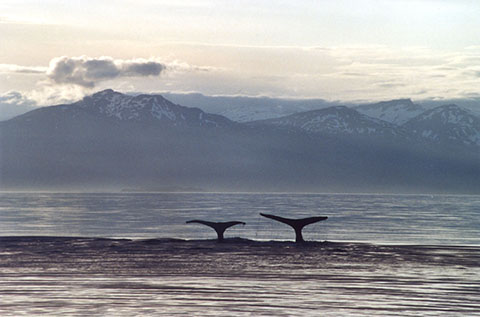 Payne describes the whale songs as “exuberant, uninterrupted rivers of sound” with long repeated “themes”, each song lasting up to 30 minutes and sung by an entire group of male humpbacks at once. The songs would be varied slightly between each breeding season, with a few new phrases added on and a few others dropped.

Payne would also be the first to suggest fin whales and blue whales can communicate with sound across whole oceans. 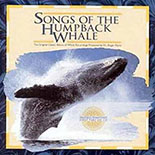 Some of Payne’s recordings were released in 1970 as an LP called Songs of the Humpback Whale, which helped to gain momentum for the Save the Whales movement seeking to end commercial whaling, which at the time was pushing many species dangerously close to extinction. Commercial whaling was finally banned by the International Whaling Commission in 1986.

In addition to whale recordings Payne has also published books and worked with film crews on many television documentary productions and on the IMAX movie Whales.

In 1971, Payne founded Ocean Alliance, a 501(c)3 organization working with whale and ocean conservation. It is based in Lincoln, Massachusetts. He still heads the organization. He was also an assistant professor of biology at Rockefeller University and, concurrently, a research zoologist at the Institute for Research in Animal Behavior, run by Rockefeller University and the New York Zoological Society.

Payne has received a United Nations Environment Programme Global 500 Award (1988) and a MacArthur genius award (1984) among other awards for his research. He is a Knight in the Netherlands Order of the Golden Ark (1977). He was a co-recipient of the Albert Schweitzer medal, Animal Welfare Institute (1980). The Humane Society of the U.S presented him the Joseph Wood Krutch Medal in 1989. The Lyndhurst Foundation conferred its Lyndhurst Prize on him (1984). He received Honorary membership of the Society for Marine Mammalogy (2010).

In 1978, Kate Bush’s debut album ‘The Kick Inside’ features a portion of ‘slowed-down solo whale’ (from Songs of the Humpback Whale) as an intro to the opening track ‘Moving’.

In 2010, the band Glass Wave included Payne’s whale recordings in the first track (“Balena”) and last track (“Moby Dick”) of their album.