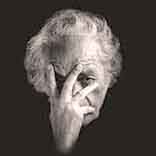 Parra is considered an influential poet in Chile, as well as throughout Latin America. Some also argue he ranks among the most important poets of Spanish language literature. Parra, however, describes himself as an “anti-poet,” due to his distaste for standard poetic pomp and function: after recitations he exclaims Me retracto de todo lo dicho, or “I take back everything I said.”

Parra has been nominated several times for the Nobel Prize in Literature. On December 1, 2011, Parra won the Spanish Ministry of Culture’s Cervantes Prize, the most important literary prize in the Spanish-speaking world.

In the beginning God created slums
and garbage dumps
He looked out from his balcony
and saw they were gorgeous
and said:
Let there be many more
And as if by the arts of magic
other garbage dumps appeared
more dreadful than the former
and an infinite number of new slums
with of course no sanitary facilities
but vast contingents of flies
in contention over the commenweals’ shit

This is oh so very amusing
God exclaimed

Write as you will
In whatever style you like
Too much blood has run under the bridge
To go on believing
That only one road is right.

In poetry everything is permitted.

With only this condition of course,
You have to improve the blank page.