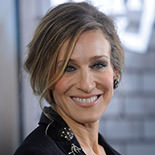 In 2012, Parker returned to television for the first time since Sex and the City, portraying Isabelle Wright in three episodes of the FOX series Glee. She is currently starring in the HBO series, Divorce.