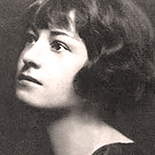 From a conflicted and unhappy childhood, Parker rose to acclaim, both for her literary output in such venues as The New Yorker and as a founding member of the Algonquin Round Table. Following the breakup of the circle, Parker traveled to Hollywood to pursue screenwriting. Her successes there, including two Academy Award nominations, were curtailed as her involvement in left-wing politics led to a place on the Hollywood blacklist.

Dismissive of her own talents, she deplored her reputation as a “wisecracker”. Nevertheless, her literary output and reputation for her sharp wit have endured.

My love, he’s mad, and my love, he’s fleet,
And a wild young wood-thing bore him!
The ways are fair to his roaming feet,
And the skies are sunlit for him.
As sharply sweet to my heart he seems
As the fragrance of acacia.
My own dear love, he is all my dreams,—
And I wish he were in Asia.

My love runs by like a day in June,
And he makes no friends of sorrows.
He’ll tread his galloping rigadoon
In the pathway of the morrows.
He’ll live his days where the sunbeams start,
Nor could storm or wind uproot him.
My own dear love, he is all my heart,—
And I wish somebody’d shoot him.

I do not like my state of mind;
I’m bitter, querulous, unkind.
I hate my legs, I hate my hands,
I do not yearn for lovelier lands.
I dread the dawn’s recurrent light;
I hate to go to bed at night.
I snoot at simple, earnest folk.
I cannot take the gentlest joke.
I find no peace in paint or type.
My world is but a lot of tripe.
I’m disillusioned, empty-breasted.
For what I think, I’d be arrested.
I am not sick, I am not well.
My quondam dreams are shot to hell.
My soul is crushed, my spirit sore;
I do not like me any more.
I cavil, quarrel, grumble, grouse.
I ponder on the narrow house.
I shudder at the thought of men….
I’m due to fall in love again.