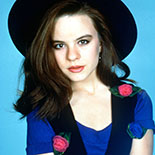 Jenna von Oÿ (born May 2, 1977) is an American actress and country music singer.

She is perhaps best known for her role as Six LeMeure on the NBC sitcom Blossom. She also had a voicing role in “Pepper Ann” as well as the role of Stevie Van Lowe on the UPN sitcom The Parkers.