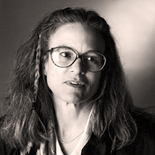 Sharon Olds (born November 19, 1942) is an American poet. Olds has been the recipient of many awards including the 2013 Pulitzer Prize in Poetry, the 1984 National Book Critics Circle Award, and the first San Francisco Poetry Center Award in 1980.

THE CONNOISSEUSE OF SLUGS
Sharon Olds

When I was a connoisseuse of slugs
I would part the ivy leaves, and look for the
naked jelly of those greenish creatures,
translucent strangers glistening along
the stones, slowly, their gelatinous bodies
at my mercy. Made mostly of water, they would shrivel
to nothing if they were sprinkled with salt,
but I was not interested in that. What I liked
was to draw aside the ivy, breathe
the odor of the wall, and stand there in silence
until the slug forgot I was there
and sent its antennae up out of its
head, the glimmering umber horns
rising like telescopes, until finally the
sensitive knobs would pop out the ends,
unerring and intimate. Years later,
when I first saw a naked man,
I gasped with pleasure to see that quiet
mystery reenacted, the slow
elegant being coming out of hiding and
gleaming in the dark air, eager and so
trusting you could weep.

THE LINESharon OldsWhen we understood it might be cancer, I lay down beside you in the night, my palm resting in the groove of your chest, the rachis of a leaf. There was no question of making love: deep inside my body that small hard lump. In the half-light of my half-life, my hand in the beautiful sharp cleft of your chest, the valley of the shadow of death, there was only the present moment, and as you slept in the quiet, I watched you as one watches a newborn child, aware each moment of the miracle, the line that has been crossed out of the darkness.