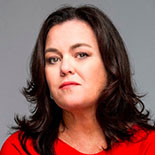 She has also been a magazine editor, and continues to be a celebrity blogger, lesbian rights activist, television producer, and collaborative partner in the LGBT family vacation company R Family Vacations.

O’Donnell started her comedy career while still a teenager. Her big break was on the talent show Star Search in 1984. After a TV sitcom and a series of movies introduced her to a larger national audience, from 1996 to 2002 she hosted The Rosie O’Donnell Show, which won multiple Emmy Awards. During this time, she wrote her first memoir, Find Me, and developed the nickname “Queen of Nice” as well as a reputation for philanthropic efforts. She used the book’s $3 million advance to establish her For All Kids foundation and promote other charity projects, encouraging celebrities on her show to take part.