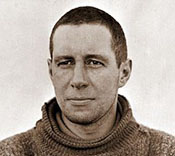 He died during the Terra Nova Expedition. Oates, afflicted with gangrene and frostbite, walked from his tent into a blizzard. His death is seen as an act of self-sacrifice when, aware his ill health was compromising his three companions’ chances of survival, he chose certain death.

Scott’s party faced extremely difficult conditions on the return journey, mainly due to the exceptionally adverse weather, poor food supply, injuries sustained from falls, and the effects of scurvy and frostbite all slowing their progress. On February 17, 1912, near the foot of the Beardmore glacier, Edgar Evans died, suspected by his companions to be the result of a blow to his head suffered during a fall into a crevasse a few days earlier.

Oates’ feet had become severely frostbitten and it has been suggested (but never evidenced) that his war wound had re-opened due to the effects of scurvy. He was certainly weakening faster than the others. In his diary entry of March 5, Scott wrote “Oates’ feet are in a wretched condition… The poor soldier is very nearly done.” Oates’ slower progress, coupled with the unwillingness of his three remaining companions to leave him, was causing the party to fall behind schedule.

With an average of 65 miles (105 km) between the pre-laid food depots and only a week’s worth of food and fuel provided by each depot, they needed to maintain a march of over 9 miles (14 km) a day in order to have full rations for the final 400 miles (640 km) of their return journey across the Ross Ice Shelf. However, 9 miles (14 km) was about their best progress any day and this had lately reduced to sometimes only 3 miles (4.8 km) a day due to Oates’ worsening condition. On March 15, Oates told his companions that he could not go on and proposed that they leave him in his sleeping-bag, which they refused to do. He managed a few more miles that day but his condition worsened that night.

Waking on the morning of March 16, and forgoing the pain and effort of putting his boots on, he walked out of the tent into a blizzard and −40 °F (−40 °C) temperatures to his death. Scott also wrote in his diary, “We knew that poor Oates was walking to his death, but though we tried to dissuade him, we knew it was the act of a brave man and an English gentleman.”

According to Scott’s diary, before Oates exited the tent and walked to his death, he uttered the words “I am just going outside and may be some time.”