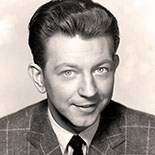 O’Connor came to fame in a series of movies in which he co-starred alternately with Gloria Jean, Peggy Ryan, and Francis the Talking Mule. He is best known today for his role as Gene Kelly’s friend and colleague Cosmo Brown in Singin’ in the Rain (1952).