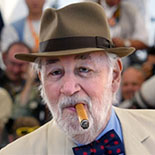 Noiret’s screen debut (1949) was an uncredited role in Gigi. In 1955 he appeared in La Pointe Courte directed by Agnès Varda. She said later – “I discovered in him a breadth of talent rare in a young actor.” Sporting a pudding-basin haircut, Noiret played a lovelorn youth in the southern fishing port of Sète. He later admitted : “I was scared stiff, and fumbled my way through the part – I am totally absent in the film.” He was not cast again until 1960 in Zazie dans le métro. After playing second leads in Georges Franju’s Thérèse Desqueyroux in 1962, and in Le Capitaine Fracasse, from Théophile Gautier’s romantic adventure, he became a regular on the French screen, without being cast in major roles until A Matter of Resistance directed by Jean-Paul Rappeneau in 1966. He became a star in France with Yves Robert’s Alexandre le Bienheureux

“When I began to have success in the movies,” Noiret told film critic Joe Leydon at the Cannes Film Festival in 1989, “it was a big surprise for me. For actors of my generation—all the men of 50 or 60 now in French movies—all of us were thinking of being stage actors. Even people like Jean-Paul Belmondo, all of us, we never thought we’d become movie stars. So, at the beginning, I was just doing it for the money, and because they asked me to do it. But after two or three years of working on movies, I started to enjoy it, and to be very interested in it. And I’m still very interested in it, because I’ve never really understood how it works. I mean, what is acting for the movies? I’ve never really understood.”