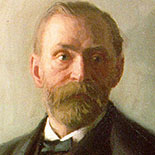 He was the inventor of dynamite. Nobel also owned Bofors, which he had redirected from its previous role as primarily an iron and steel producer to a major manufacturer of cannon and other armaments. Nobel held 350 different patents, dynamite being the most famous. His fortune was used posthumously to institute the Nobel Prizes. The synthetic element nobelium was named after him. His name also survives in modern-day companies such as Dynamit Nobel and AkzoNobel, which are descendants of mergers with companies Nobel himself established.

As a young man, Nobel studied with chemist Nikolai Zinin; then, in 1850, went to Paris to further the work; and, at 18, he went to the United States for four years to study chemistry, collaborating for a short period under inventor John Ericsson, who designed the American Civil War ironclad USS Monitor. Nobel filed his first patent, for a gas meter, in 1857.

On September 3, 1864, a shed, used for the preparation of nitroglycerin, exploded at the factory in Heleneborg Stockholm, killing five people, including Nobel’s younger brother Emil. Dogged by more minor accidents but unfazed, Nobel went on to build further factories, focusing on improving the stability of the explosives he was developing. Nobel invented dynamite in 1867, a substance easier and safer to handle than the more unstable nitroglycerin. Dynamite was patented in the US and the UK and was used extensively in mining and the building of transport networks internationally. In 1875 Nobel invented gelignite, more stable and powerful than dynamite, and in 1887 patented ballistite, a forerunner of cordite.

In 1888 Alfred’s brother Ludvig died while visiting Cannes and a French newspaper erroneously published Alfred’s obituary. It condemned him for his invention of dynamite and is said to have brought about his decision to leave a better legacy after his death. The obituary stated, Le marchand de la mort est mort (“The merchant of death is dead”) and went on to say, “Dr. Alfred Nobel, who became rich by finding ways to kill more people faster than ever before, died yesterday.” Alfred was disappointed with what he read and concerned with how he would be remembered. 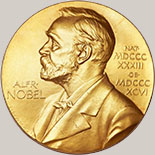 On November 27, 1895, at the Swedish-Norwegian Club in Paris, Nobel signed his last will and testament and set aside the bulk of his estate to establish the Nobel Prizes, to be awarded annually without distinction of nationality. After taxes and bequests to individuals, Nobel’s will allocated 94% of his total assets, 31,225,000 Swedish kronor, to establish the five Nobel Prizes. This converted to GBP £1,687,837 at the time. In 2012, the capital was worth around SEK 3.1 billion (USD 472 million, EUR 337 million), which is almost twice the amount of the initial capital, taking inflation into account.