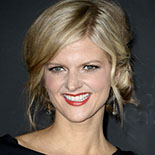 Arden Myrin (born December 10, 1973) is an American actress and comedian, best known for her work on the television shows Chelsea Lately, @Midnight, Fresh Off the Boat and MADtv.

Myrin has appeared in many films, including Bachelorette, Kinsey and What Women Want. Notable television credits include guest roles on Orange Is The New Black, Fresh Off the Boat, Key and Peele, Inside Amy Schumer, Hung, Friends and Reno 911!.

Myrin has been a frequent panelist on E!’s Chelsea Lately roundtable, appearing over 100 times . She has also appeared twice as a guest on internet podcast Two Jacks in the Hole and twice appeared on the USA Network show Psych as a stalker with an attraction for older men.