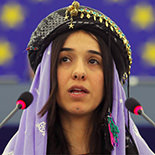 Murad is the founder of Nadia’s Initiative, an organization dedicated to “helping women and children victimized by genocide, mass atrocities, and human trafficking to heal and re-build their lives and communities”