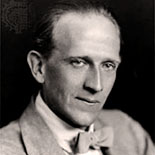 Milne was a noted writer, primarily as a playwright, before the huge success of Pooh overshadowed all his previous work. Milne served in both World Wars, joining the British Army in World War I, and was a captain of the British Home Guard in World War II.

LINES AND SQUARES
A. A. Milne

Whenever I walk in a London street,
I’m ever so careful to watch my feet;
And I keep in the squares,
And the masses of bears,
Who wait at the corners all ready to eat
The sillies who tread on the lines of the street
Go back to their lairs,
And I say to them, “Bears,
Just look how I’m walking in all the squares!”

And the little bears growl to each other, “He’s mine,
As soon as he’s silly and steps on a line.”
And some of the bigger bears try to pretend
That they came round the corner to look for a friend;
And they try to pretend that nobody cares
Whether you walk on the lines or squares.
But only the sillies believe their talk;
It’s ever so portant how you walk.
And it’s ever so jolly to call out, “Bears,
Just watch me walking in all the squares!”

Previous
Next
More A. A. Milne