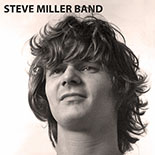 Miller began his career in blues and blues rock and evolved to a more pop-oriented sound which, from the mid-1970s through the early 1980s, resulted in a series of highly popular singles and albums.