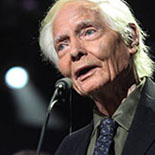 William Stanley Merwin (born September 30, 1927) is an American poet, credited with over fifty books of poetry, translation and prose.

During the 1960s anti-war movement, Merwin’s unique craft was thematically characterized by indirect, unpunctuated narration. In the 1980s and 1990s, Merwin’s writing influence derived from his interest in Buddhist philosophy and deep ecology. Residing in Hawaii, he writes prolifically and is dedicated to the restoration of the islands’ rainforests.

Merwin has received many honors, including the Pulitzer Prize for Poetry (in both 1971 and 2009) and the Tanning Prize, one of the highest honors bestowed by the Academy of American Poets, as well as the Golden Wreath of the Struga Poetry Evenings. In 2010, the Library of Congress named Merwin the seventeenth United States Poet Laureate.

Listen
with the night falling we are saying thank you
we are stopping on the bridges to bow for the railings
we are running out of the glass rooms
with our mouths full of food to look at the sky
and say thank you
we are standing by the water looking out
in different directions.