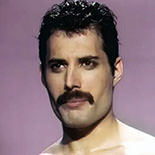 Freddie Mercury (born September 5, 1946 – November 24, 1991) was a British singer-songwriter and producer, best known as the lead vocalist and lyricist of the rock band Queen.

As a performer, he was known for his flamboyant stage persona and powerful vocals over a four-octave range. As a songwriter, he composed many hits for Queen, including “Bohemian Rhapsody,” “Killer Queen,” “Somebody to Love,” “Don’t Stop Me Now,” “Crazy Little Thing Called Love,” and “We Are the Champions.” In addition to his work with Queen, he led a solo career, and also occasionally served as a producer and guest musician (piano or vocals) for other artists. He died of bronchopneumonia brought on by AIDS on November 24, 1991, only one day after publicly acknowledging he had the disease.