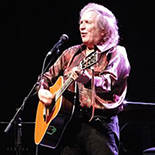 McLean is most famous for the 1971 album American Pie, containing the songs “American Pie” and “Vincent”. Iona College conferred an honorary doctorate on McLean in 2001.

In February 2002, “American Pie” was inducted into the Grammy Hall of Fame. In 2004, McLean was inaugurated into the Songwriters Hall of Fame. Garth Brooks presented the award and said “Don McLean: his work, like the man himself, is very deep and very compassionate. His pop anthem ‘American Pie’ is a cultural phenomenon”. In 2007, the biography The Don McLean Story: Killing Us Softly With His Songs was published. Biographer Alan Howard conducted extensive interviews for this, the only book-length biography of the often reclusive McLean to date. In February 2012 McLean won the BBC Radio 2 Folk Awards Life Time Achievement award.

paint your palette blue and grey

look out on a summer’s day
with eyes that know the
darkness in my soul.
Shadows on the hills
sketch the trees and the daffodils

catch the breeze and the winter chills

in colors on the snowy linen land.
And now I understand what you tried to say to me

how you suffered for your sanity
how you tried to set them free.
They would not listen
they did not know how

weathered faces lined in pain
are soothed beneath the artist’s
loving hand.
And now I understand what you tried to say to me

how you suffered for your sanity
how you tried to set them free.
perhaps they’ll listen now.

and when no hope was left in sight on that starry
starry night.
You took your life
as lovers often do;
But I could have told you, Vincent
this world was never
meant for one
as beautiful as you.

frameless heads on nameless walls
with eyes
that watch the world and can’t forget.
Like the stranger that you’ve met

the ragged men in ragged clothes

the silver thorn of bloody rose
lie crushed and broken
on the virgin snow.
And now I think I know what you tried to say to me

how you suffered for your sanity

how you tried to set them free.
They would not listen
they’re not
list’ning still
perhaps they never will.