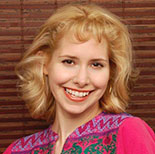 McKay is a former stand-up comedian, noted for her critically acclaimed albums, and for her Broadway debut in The Threepenny Opera (2006). Her music has showcased different genres, from jazz to rap and disco to funk.