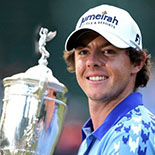 Rory McIlroy (born May 4, 1989) is a Northern Irish professional golfer who is a member of both the European and PGA Tours.