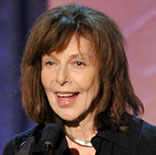 Elaine May (born April 21, 1932) is an American film director, screenwriter and actress.

She achieved her initial, and possibly greatest fame in the 1950s from her improvisational comedy routines with Mike Nichols, performing as Nichols and May. She is a two-time Academy Award-nominated screenwriter, for The Heartbreak Kid (1972) and Primary Colors (1998). She also received an Oscar nomination for co-writing Heaven Can Wait (1978). In 1996, she reunited with Nichols to write the screenplay for The Birdcage, directed by Nichols. She received the National Medal of Arts in 2012 for her unique contributions.

After studying acting with former theater coach, Maria Ouspenskaya in Los Angeles, she moved to Chicago in 1955 and became a founding member of The Compass Players, an improvisational theater group. May began working alongside Nichols, who was also in the group, and together they began writing and performing their own comedy sketches which were enormously popular. In 1957 they both quit the group to form their own stage act, Nichols and May, in New York. Jack Rollins, who produced most of Woody Allen’s films, said their act was “so startling, so new, as fresh as could be. I was stunned by how really good they were.”

They performed nightly to mostly sold-out shows, in addition to making various TV and radio appearances. In their comedy act, they created satirical clichés and character types which made fun of the new intellectual, cultural, and social order that was just emerging at the time. In doing so, “May cracked the stereotype of what roles a woman could play”, wrote Gerald Nachman, “breaking through the psychological restrictions of playing comedy as a woman.” Together, they became an inspiration to many younger comedians, including Lily Tomlin and Steve Martin. After four years, at the height of their fame, they decided to discontinue their act and took their careers in different directions: Nichols becoming a leading film director and May becoming primarily a screenwriter and playwright, along with acting and directing.

Previous
Next
More Elaine May