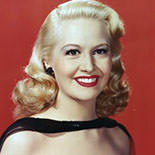 A sex symbol of the 1940s and 1950s, she appeared in several films and radio programs, and entertained the troops during World War II and the Korean War on USO tours with Bob Hope.