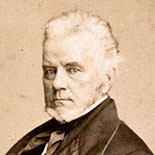 Mason’s most well-known tunes include his arrangement of “Joy to the World” and “Bethany”, his setting of the hymn, “Nearer, My God, to Thee”. He was largely responsible for introducing music into American public schools, and is considered to be the first important music educator in the United States. He is also widely criticized for his role in helping to largely eliminate the robust tradition of participatory sacred music that flourished in America before his time.