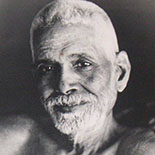 Ramana Maharshi (December 30, 1879 – April 14, 1950) is widely acknowledged as one of the outstanding Hindu gurus of modern times. He was born Venkataraman Iyer, in Tiruchuli, Tamil Nadu, South India.

On July 17 1896, at age 16, Venkataraman had a life-changing experience. He spontaneously initiated a process of self-enquiry that culminated, within a few minutes, in his own permanent awakening.

Six weeks later left his home to journey to the holy mountain Arunachala, Tiruvannamalai, where he remained for the rest of his life.

His first years were spent in solitude, but his stillness and his appearance as a sannyasin soon attracted devotees. In later years, he responded to questions, but always insisted that silence was the purest teaching. His verbal teachings flowed “from his direct knowledge that consciousness was the only existing reality.” In later years, a community grew up around him, where he was available twenty-four hours a day to visitors. Though worshipped by thousands, he never allowed anyone to treat him as special, or receive private gifts. He treated all with equal respect. Since the 1930s his teachings have also been popularized in the west.

Venkataraman was given the name Bhagavan Sri Ramana Maharshi by one of his earliest devotees, Ganapati Muni. This would be the name by which he became known to the world.

In response to questions on self-liberation and the classic texts on Yoga and Vedanta, Ramana recommended self-enquiry as the principal way to awaken to the “realising the Self and attaining liberation. He also recommended Bhakti, and gave his approval to a variety of paths and practices.