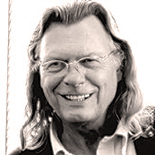 Thomas Lux (born December 10, 1946) is an American poet that holds the Margaret T. and Henry C. Bourne, Jr. Chair in Poetry at the Georgia Institute of Technology and runs Georgia Tech’s “Poetry at Tech” program.

Thomas has been a finalist for the Los Angeles Times Book Award in Poetry and has received three National Endowment for the Arts grants and a Guggenheim Fellowship.

AT THE FAR END OF A LONG WHARF
Thomas Lux

At the far end of a long wharf
a deaf child, while fishing, hauls in
a large eel and—not
because it is ugly—she bashes its brains
out of eeldom on the hot
planks—whamp, whamp, whamp, a sound
she does not hear. It’s the distance
and the heat that abstracts
the image for me. She also does not hear,
nor do I, the splash the eel makes
when she tosses it in her bucket,
nor do we hear the new bait
pierced by the clean hook, nor
its lowering into the water again.
Nobody could. I watch her
all afternoon until, catching nothing
else, she walks the wharf toward
me, her cousin, thinking
with a thousand fingers. Pointing
at our boat she tells me
to drag it to the water. She wants me to row
her out to the deep lanes of fish.
Poetry is a menial task.

HIS JOB IS HONEST AND SIMPLE
Thomas Lux

His job is honest and simple: keeping
the forest tidy. He replaces,
after repairing, the nests
on their branches, he points every pine needle north,
polishes the owl’s stained perch,
feather-dusts the entrance
to the weasel’s burrow, soft-brushes
each chipmunk (the chinchilla
of the forest banal), buffs antlers, gives
sympathy to ragweed, tries to convince—
like a paternal and inept psychiatrist—
the lowly garter snake to think
of himself, as he parts the grass,
as an actor parting the stage curtain
to wild applause, arranges, in the clearing,
the great beams of light… This is his job: a day’s,
a week’s, a life’s calm, continuous,
low-paying devotion. At dawn
he makes a few sandwiches and goes
to work. I love this, he thinks as he passes
the wild watercress—its green as stunning
as surviving a plane crash—in the small,
inaccessible swamp.