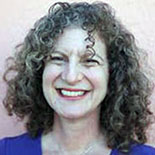 Alison Luterman is a poet and essayist living in Oakland, California.

Luterman’s poems, short stories, and essays have appeared in magazines and anthologies, including Poetry East, Poet Lore, Whetstone, Kalliope, Oberon, The Sun and The Brooklyn Review. Her first book of poems The Largest Possible Life won the Cleveland State University poetry prize and was published in 2001. Her second book, See How We Almost Fly, is forthcoming in 2005.

She’s worked as a poet-in-the-schools, a theater teacher, a freelance journalist, an HIV test counselor, and a drug-and-alcohol prevention counselor, and has given poetry readings and taught writing workshops for adults across the country.

One of the great
unheralded joys of late
middle age is the mind-popping
sensation
of how many things
I’ve been wrong about,
starting with sex,
my parents,
and the meaning of the word
bruschetta, then gliding on
seamlessly to men,
marriage, and magic
mushrooms. All my firmly
held opinions have loosened
like teeth in receding gums
or pilings that the indifferent sea
has pounded into submission
for centuries.
What a relief
to have been wrong
about gluten-free pasta
and skinny jeans, gender
and white privilege!
I suspect I’ve been wrong
about pretty much everything,
including death,
which will come for everyone
except me.

This breeze, the hussy, has traveled around the world,
gathering smoke from cook-fires in Afghanistan,
stealing the sweat of lovers in London,
the stink of traffic in Marrakech,

blowing her hot breath through your threadbare heart,
huffing up your skirt,
roughening your genius hair,
hot with the stench of battlefields,
cool and sweet with the cries of gulls.

Breeze! Tell me it’s me
and me alone that you love.

How can I tell you that
when I have just caressed the seashell ears of a baby
and caught, with equal care,
the parched last breath of the woman
whose strangled, abandoned body
won’t be found for months to come?

When this morning I whipped veils against the foreheads
of that long line of refugees
carrying their lives on their backs
through an endless gray-and-white newspaper desert?

And this afternoon recorded the wheeze
of the bull elephant as he chased through the underbrush
trumpeting after his mate,
and listened just as intently
to the cricket, fiddling her delicate desire?

Well, then, what do you want with me?

I want one stray hair from your scalp,
one drop of sweat from under your armpit.
Give me that short breath you just took without thinking,
the blood-blister on your toe, inside your gritty sandal,
the fleeting impulse too swift to write down.

Because no one could ever praise me enough,
because I don’t mean these poems only
but the unseen
unbelievable effort it takes to live
the life that goes on between them,
I think all the time about invisible work.
About the young mother on Welfare
I interviewed years ago,
who said, “It’s hard.
You bring him to the park,
run rings around yourself keeping him safe,
cut hot dogs into bite-sized pieces fro dinner,
and there’s no one
to say what a good job you’re doing,
how you were patient and loving
for the thousandth time even though you had a headache.”
And I, who am used to feeling sorry for myself
because I am lonely,
when all the while,
as the Chippewa poem says, I am being carried
by great winds across the sky,
thought of the invisible work that stitches up the world day and night,
the slow, unglamorous work of healing,
the way worms in the garden
tunnel ceaselessly so the earth can breathe
and bees ransack this world into being,
while owls and poets stalk shadows,
our loneliest labors under the moon.

There are mothers
for everything, and the sea
is a mother too,
whispering and whispering to us
long after we have stopped listening.
I stopped and let myself lean
a moment, against the blue
shoulder of the air. The work
of my heart
is the work of the world’s heart.
There is no other art.

We were making love and it was a solid thing,
a garden made of breath, a city of caresses.
We were making love, even though
it would disappear each time we made it
and have to be made over and over again,
the way God, abiding, renews the world,
every ragged leaf and leaf of it.
I admit I was making you, a man,
from dreams and spittle,
from the nothingness we both sprang out of.
I could visualize you packed
and ready to slice down the chute
of your mother
into this world of pain and plum trees,
waterfalls and volcanoes.
I had been waiting years for you, even in the rain.
We were making love,
melting ourselves down in that crucible
smooth, soaked, flushed, sparkling.
Already I’d forgotten what year it was.
Already I’d forgotten all the lovers who failed me
all those whom I had failed.
You don’t have to tell me now
how the floodwaters were already rising,
the house slipping
from its shaky foundations,
off-course meteors aiming
directly at the cleft in the valley of the heart.
How when I said I was willing
to throw everything into that fire,
the fire heard me and laughed.