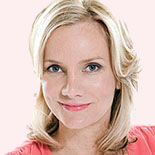 She is perhaps best known for being one of the original correspondents on the popular Comedy Central satirical news series The Daily Show from 1996 to 2000; she is also known as Tripp’s mother Beth Campbell from I’m in the Band and Avery’s mother, Ellen Jennings in Dog with a Blog.