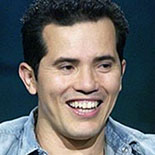 As of 2009, Leguizamo has appeared in over 75 films, produced over 10 films, starred on Broadway in several productions (winning several awards), made over a dozen television appearances, and has produced or starred in many other television shows.