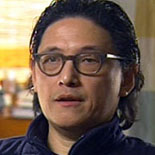 He was born in Jakarta, Indonesia, to Chinese parents. His maternal grandfather was Yuan Shikai, China’s first Republican President, who attempted to make himself emperor.

Lee’s father, who was a personal physician to Mao Zedong while in China, relocated his family to Indonesia, where he helped found Gamaliel University. His father was exiled and spent 19 months in an Indonesian prison camp in Macau. In 1959 the Lee family fled the country to escape anti-Chinese sentiment and after a five-year trek through Hong Kong and Japan, they settled in the United States in 1964. Li-Young Lee attended the University of Pittsburgh and the University of Arizona, and the State University of New York at Brockport.

THE GIFT
Li-Young LeeTo pull the metal splinter from my palm
my father recited a story in a low voice.
I watched his lovely face and not the blade.
Before the story ended, he’d removed
the iron sliver I thought I’d die from.

I can’t remember the tale,
but hear his voice still, a well
of dark water, a prayer.
And I recall his hands,
two measures of tenderness
he laid against my face,
the flames of discipline
he raised above my head.

Had you entered that afternoon
you would have thought you saw a man
planting something in a boy’s palm,
a silver tear, a tiny flame.
Had you followed that boy
you would have arrived here,
where I bend over my wife’s right hand.

Look how I shave her thumbnail down
so carefully she feels no pain.
Watch as I lift the splinter out.
I was seven when my father
took my hand like this,
and I did not hold that shard
between my fingers and think,
Metal that will bury me,
christen it Little Assassin,
Ore Going Deep for My Heart.
And I did not lift up my wound and cry,
Death visited here!
I did what a child does
when he’s given something to keep.
I kissed my father.