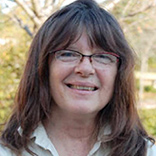 Dorianne Laux was born on January 10, 1952. She worked as a sanatorium cook, a gas station manager, a maid, and a donut holer before receiving a B.A. in English from Mills College in 1988.

When I came with you the first time
on the floor of your office, the dirty carpet
under my back, the heel of one foot
propped on your shoulder, I went ahead
and screamed, full-throated, as loud
and as long as my body demanded,
because somewhere, in the back of my mind,
packed in the smallest neurons still capable
of thought, I remembered
we were in a warehouse district
and that no sentient being resided for miles.
Afterwards, when I could unclench
my hands and open my eyes, I looked up.
You were on your knees, your arms
stranded at your sides, so still—
the light from the crooked necked lamp
sculpting each lift and delicate twist,
the lax muscles, the smallest veins
on the backs of your hands. I saw
the ridge of each rib, the blue hollow
pulsing at your throat, all the colors
in your long blunt cut hair which hung
over your face like a raffia curtain
in some south sea island hut.
And as each bright synapse unfurled
and followed its path, I recalled
a story I’d read that explained why women
cry out when they come—that it’s
the call of the conqueror, a siren howl
of possession. So I looked again
and it felt true, your whole body
seemed defeated, owned, having taken on
the aspect of a slave in shackles, the wrists
loosely bound with invisible rope.
And when you finally spoke you didn’t
lift your head but simply moaned the word god
on an exhalation of breath—I knew then
I must be merciful, benevolent,
impossibly kind.

Except for the rise and fall of a thin sheet
draped across your chest, you could be dead.
Your hair curled into the pillow.
Arms flung wide. The moon fills our window
and I stand in a white
rectangle of light. Hands crossed
over empty breasts. In an hour
the moon will lower itself. In the backyard
the dog will bark, dig up his bone
near the redwood fence. If we could have had
children, or religion, maybe sleep
wouldn’t feel like death, like shovel heads
packing the black earth down.
Morning will come because it has to.
You will open your eyes. The sun
will flare and rise. Chisel the hills
into shape. The sax player next door
will lift his horn and pour
music over the downturned Vs of rooftops,
the tangled ivy, the shivering tree,
giving it all back to us as he breathes:
The garden. The hard blue sky. The sweet
apple of light.

FOR THE SAKE OF STRANGERS
Dorianne Laux

No matter what the grief, its weight,
we are obliged to carry it.
We rise and gather momentum, the dull strength
that pushes us through crowd.
And then the young boy gives me directions
so avidly. A woman holds the glass door open,
waits patiently for my empty body to pass through.
All day it continues, each kindness
reaching toward another—a stranger
singing to no one as I pass on the path, trees
offering their blossoms, a retarded child
who lifts his almond eyes and smiles.
Somehow they always find me, seem even
to be waiting, determined to keep me
from myself, from the thing that calls to me
as it must have once called to them—
this temptation to step off the edge
and fall weightless, away from the world.

At the high school football game, the boys
stroke their new muscles, the girls sweeten their lips
with gloss that smells of bubblegum, candy cane,
or cinnamon. In pleated cheerleader skirts
they walk home with each other, practicing yells,
their long bare legs forming in the dark.
Under the arched field lights a girl
in a velvet prom dress stands near the chainlink,
a cone of roses held between her breasts.
Her lanky father, in a corduroy suit, leans
against the fence. While they talk, she slips a foot
in and out of a new white pump, fingers the weave
of her French braid, the glittering earrings.
They could be a couple on their first date, she,
a little shy, he trying to impress her
with his casual stance. This is the moment
when she learns what she will love: a warm night,
the feel of nylon between her thighs, the fine hairs
on her arms lifting when a breeze
sifts in through the bleachers, cars
igniting their engines, a man bending over her,
smelling the flowers pressed against her neck.

You called it screwing, what we did nights
on the rug in front of the mirror, draped
over the edge of a hotel bed, on balconies
overlooking the dark hearts of fir trees

or a city of flickering lights. You’d
whisper that word into my ear
as if it were a thing you could taste—
a sliver of fish, a swirl of chocolate

on the tongue. I knew only
the rough exuberant consonants
of fucking, and this soft s and hard c
was a new sound—querulous, slow,

like the long moments of leaving
between thrusts. I don’t know what
to make of it, now that you’ve gone. I think
of metal eating wood. Delicate filaments

quivering inside a bulb of thin glass.
Harsh light. Corks easing up through
the wet necks of wine bottles. A silver lid
sealed tight on a jar skinned plums.

I see two blue dragonflies hovering, end
to end, above the pond, as if twisting
the iridescence deep into each other’s
body, abdomens writhing, spiraling

into the wing-beaten air. And your voice
comes back to me through the trees, this word
for what we couldn’t help but do
to each other—a thin cry, unwinding.