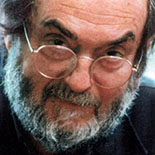 Stanley Kubrick (July 26, 1928 – March 7, 1999) was an American film director, screenwriter, producer, cinematographer, and editor who did much of his work in the United Kingdom.

Part of the New Hollywood film-making wave, he is regarded as one of the greatest and most influential directors of all time. His films, typically adaptations of novels or short stories, are noted for their “dazzling” and unique cinematography, attention to detail in the service of realism, and the evocative use of music. Kubrick’s films covered a variety of genres, including war, crime, literary adaptations, romantic and black comedies, horror, epic and science fiction. Kubrick was also noted for being a demanding perfectionist, using painstaking care with scene staging, camera-work and coordinating extremely closely both with his actors and his behind-scenes collaborators.

Starting out as a photographer in New York City, he taught himself all aspects of film production and directing after graduating from high school. His earliest films were made on a shoestring budget, followed by one Hollywood blockbuster, Spartacus, after which he spent most of the rest of his career living and filming in the United Kingdom. His home at Childwickbury Manor in Hertfordshire (north of and near to London) became his workplace where he did his writing, research, editing and management of production details. This allowed him to have almost complete artistic control, but with the rare advantage of having financial support from major Hollywood studios.

Many of his films broke new ground in cinematography, including 2001: A Space Odyssey (1968), a science-fiction film which director Steven Spielberg called his generation’s “big bang”, with innovative visual effects and scientific realism. For Barry Lyndon (1975), Kubrick obtained lenses developed by Zeiss for NASA in order to film scenes under natural candlelight and The Shining (1980) was among the first feature films to make use of a Steadicam for stabilized and fluid tracking shots. As with his earlier shorts, Kubrick was the cinematographer and editor on the first two of his thirteen feature films. He directed, produced and wrote all or part of the screenplays for nearly all his films.

While some of Kubrick’s films were controversial with mixed reviews, such as Paths of Glory (1957), Lolita (1962), and A Clockwork Orange (1971), most of his films were nominated for Oscars, Golden Globes or BAFTAs. Film historian Michel Ciment considers his films to be “among the most important contributions to world cinema in the twentieth century” while director Norman Jewison calls him one of the “great masters” that America has produced.