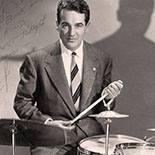 Known for his highly energetic, flamboyant style and for his showmanship, Krupa is considered one of the most influential drummers in jazz history and one the first major soloists on the instrument.