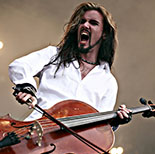 He plays a German 19th century cello; he started playing the cello when he was 5 years old and joined Apocalyptica for their third studio album Cult. Kivilaakso played in Apocalyptica’s 1995 line up, but he was concentrating on his studies when the band began their professional career. At the end of 1999 he came back, switching places with Antero Manninen, who then went to play in a classical orchestra.