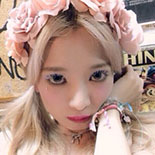 Nana Kitade (born May 2, 1987), is a Japanese singer-songwriter and musician.

In addition to being the lead singer of the rock band, The Teenage Kissers, she has had success as a solo artist,model, actress, and fashion designer. Kitade is particularly known for her songs appearing in various anime, TV shows, doramas and movie opening and endings. Kitade was featured on the cover of the Gothic & Lolita Bible, as well as featured in NEO and Kera magazines. She has toured all over Asia, Europe, and North America.