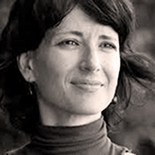 Kapka Kassabova is a poet, essayist and travel writer who was born in Bulgaria in 1973. After leaving Bulgaria as a teenager and spending her twenties in New Zealand, she now lives in the Scottish Highlands.

AND THEY WERE BOTH RIGHT
Kapka Kassabova

There is so much violence yet to be done.
He falls into her body
blind because desire makes him blind
deaf and limbless for the same reason.

But what is love?
And is this a question or a statement?

He will be
undone by it, she shudders in jubilation,
and pulls him to her night—like a dress
to be undone.

Love will be made and unmade, naturally,
unnaturally. It will be invoked
like a reason, like a form of life.
It will be forgotten.

What if love is no more than
a tangle of muscles
aching to be untied
by knowing fingers?

What if love is made and nothing else?
asked Narcissus. leaning over the green iris of water.

Nothing else,
cried Echo from the green cochlea of the woods.

IT NEVER ENTERED MY MINDKapka Kassabova

It is a Miles Davis blues
they must have heard before.

It reminds me of October rain
on a New York roof past midnight.

A trumpet player in the Paris Metro
with a hole in his knee and eyes of fever.

A winter in the south – any south
among perched villages and wailing winds.

Anybody’s childhood in an East European city
of shadows and fog.

A galaxy of dim bars along the street
in Berlin of the thirties.

The silver rustle of a single noun
yet to be coined, to mean complete sadness.

Railway stations in pre-war Italy
with snow-peaks in the crisp distance.

Lovers in worn-out coats
standing in the rain…

That’s nice, he says,
except you’ve never left this town.

She says, my love, it reminds me of the day
when you and I will part.